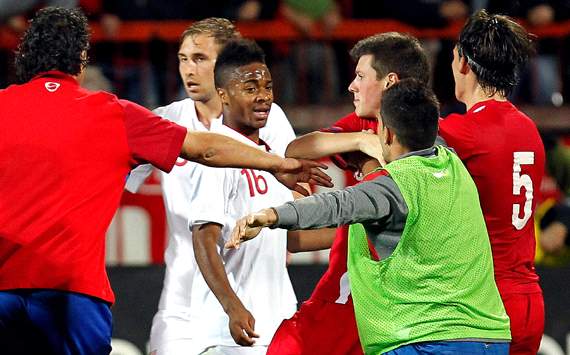 I can’t help feeling we’re wasting our breath complaining about UEFA’s embarrassingly insignificant punishment for Serbia? After all, what did we expect?

The most revealing aspect of the judgement is that the punishment of £65,000 and an Under-21 match played behind closed doors is the biggest ever given by UEFA for a racist incident. Just think about that again for a second. THE BIGGEST PUNISHMENT UEFA HAVE EVER GIVEN FOR RACIST ABUSE! Incredible isn’t it?

The fact is that UEFA does not consider racism to be an issue. The comparison of Nicklas Bendtner’s larger fine (£80,000) for displaying an advert on his pants than racist infractions attracted during thr European Championships summed up their attitudes perfrectly. To UEFA, racism’s really not terribly wrong. It’s not upsetting the sponsors, after all!

And there’s the nub of the issue. As the boycott of companies like Starbucks and Google shows, even the biggest corporations can be hurt by negative association. However, if some rumpus in a qualifying match doesn’t hurt their precious sponsors then UEFA don’t care about it. Even the Las Vegas mafia never buried a head this deep in the sand.

The final tournament stages, which is where sponsors really get their exposure, are held in such sanitised atmospheres that situations like the Serbia atrocity are unlikely to ever arise.

All the concern about giving last Summer’s continental championship to Eastern Europe came to pretty much nothing after all – certainly it was nothing UEFA couldn’t comfortably brush under the carpet. Likewise the 2010 World Cup: the social issues of South Africa were never allowed anywhere near the stadia. The World Cup in Russia will be played in the same vacuum.

Word has it that Michel Platini’s talk of appealing against his own disciplinary panel’s punishment is motivated partly by those within the organisation who have enough sense and decency to realise that a stand must be made. I hope their voices are beginning to be hurd, but I suspect they’ll have a fight on their hands to have their voices heard as they’re part of an organisation which: